FDDI School of Fashion Design (FSFD) had invited three eminent speakers for the webinar who highlight the contribution of handloom to the socio-economic development of the country and increase income of the weavers.

Mr. R. K. Gautam, IAS, Deputy Commissioner Sirmaur, NAHAN, Himachal Pradesh was the first speaker. Besides this, Padmashri S. Shakir Ali who has learned the art under the guidance of renowned artist Mr. Ved Pal Sharma in different traditional schools and specializes in Mughal Art style and Miniature Painting Art, Jaipur Rajasthan and Padmashri Vijay Sharma, -Miniature Painting Chamba, Himachal Pradesh who has played pioneer role in reviving the tradition of Pahari Miniature painting were invited to grace the occasion as speakers and share their views with the participants during the webinar. 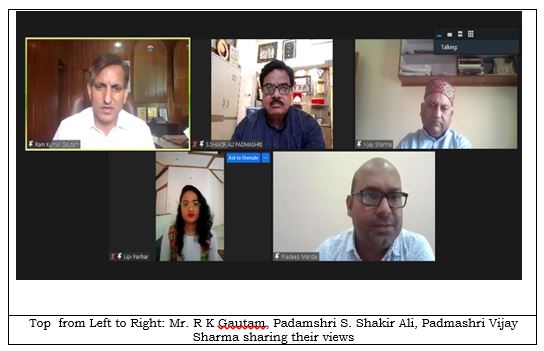 Along with the guest speakers more than 35 artisans belonging to Chanderi & Maheshwari art form, and the students and staff of FDDI joined the webinar.

Padmshri S. Shakir Ali and Padmshri Vijay Sharma presented and explained their miniature art forms and elaborated upon various techniques during the interactive session with the participants.

Through visual documentary, the students of FSFD showcased their work based on the handloom theme on Embroidery art, Chanderi Saree, Maheshwari Saree and Pathani Silk which was highly appreciated.

The take-away points of the webinar, which was held using digital communication was a win-win situation for both the students and artisans. It build a bridge of communication between them, so that the students can have better learning opportunity with the artisan during their craft cluster project study in various traditional crafts and the artisans shall pass on their legacy i.e. skill & techniques to the younger generation.

The eye opening session was followed by an interactive session of questions and answers. The webinar was streamed live on Facebook and was later covered in local newspaper, cable network and regional news channels.